Note the figure below! The image depicts a child afflicted by the disease chicken pox. What is the cause? Whether the disease can be contagious? Is there any medicine to cure it? The efforts of what we can do to avoid this disease? To get the answers of these questions, let us discuss the virus. The branch of biology that studies of the virus are virology. The virus comes from the Latin word ‘ poison ‘. Almost all of the “virus” cause disease on living creatures. The virus is classified into the kingdom because of its own nature. 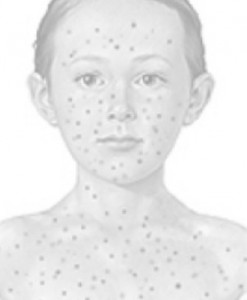 The virus can only be seen with the electron microscope. Everyone, both children and adults, can be stricken with the virus. Some infectious diseases caused by viral infections are influenza, coughs, colds, typhus, mumps, chicken pox, herpes, AIDS, and hepatitis.

When is a virus found? At first, around the year 1892, the virus used for a disease-causing agent by Von Iwanovski (Russia). He discovered the cause of disease on leaf tobacco (tobacco mosaic) which is able to penetrate the bacterial filter. If the leaves are sick touched on healthy leaves, the leaves are healthy would be contracting the disease.

However, if the leaf extract is heated to a boil hurts first and after cold smeared on healthy leaves, the leaves are healthy not stricken with the disease. From his experiments that, Iwanovski draw conclusions while that tobacco mosaic disease is caused by bacterial pathogens.

In 1893, there is new research that broke the Iwanovski conclusion because the tobacco leaf extract results developing filtered tobacco mosaic with ceramic strainer not impregnable by bacteria smeared on healthy leaf leaves healthy then remained a mosaic of contracting the disease. Thus, she speculated that the cause of the disease this is leaf mosaic of very small bacteria. Experimental m. Beijerinck from the Netherlands supported the theory of Iwanovski. Experiments are experiments tiered tobacco mosaic disease. He also concludes that the disease causes leaf mosaic is a pathogenic bacteria that are very small and are able to breed.

In 1935, the conclusion Iwanovski and m. Beijerink was dismissed by Wendell m. Stanley, United States scientists. He argued that tobacco mosaic disease is caused by a virus. Wendell isolates and crystallizing viruses. He argues that a virus is not a cell because it can be crystallized. The virus is the transition between living things and life. The virus is not the same as bacteria because if this virus crystals injected into tobacco plants that are healthy, the virus will be active again and doing the doubling of causing disease.

From then on, people get to know that the cause of the disease that attacks the tobacco is not pathogenic bacteria, but viruses are often referred to by tobacco mosaic virus (TMV Tobacco Mosaic Virus or).
After you guys know the ferocity of the virus, now surely you guys also asked, “what are the properties owned by the virus? How his way of life? How a reproduction? Whether the virus could only be detrimental to humans? ” Well, now let us learn gradually.